In 1996, the annual Governor’s Safety & Health Conference safety award was renamed to the “Gary Hawk Safety Award” in honor of long-time OSH Advisory Council member Gary Hawk, who passed away after a long battle with cancer. 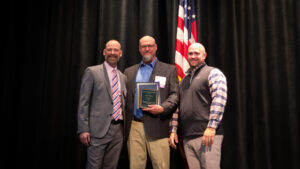 Dan Deike grew up working at his family’s implement business in Waverly, Iowa from the age of five and always admired the technicians, mechanics, and helpers in the shop. During his tenure with the family business, Dan worked as a diesel mechanic, welder, painter, and truck driver. He says, “through this experience, I developed a strong appreciation for manual workers.”

When it came time to declare a major at the University of Northern Iowa in Cedar Falls, Dan told his advisor he was most interested in being an advocate for the blue-collar worker. Dan’s advisor broke the news that there was no such degree track, so he finished his B.A. and put his passion on hold.

Dan began his career at the McAninch Corporation working as a heavy equipment operator. He worked in that role, and as a welder and fabricator, for three years before fate stepped in and presented an opportunity to fulfill the career intentions he’d had since his youth.

When Dan heard Master Builders of Iowa Safety Specialist Phil Mercuris present after an audit, Dan had his aha moment. Safety – that is how he could advocate for the blue-collar worker. Dan immediately signed up for safety classes at Iowa State University with the legendary Denis Zeimet. But just as he did so, Denis pivoted and went to DMACC, and Dan followed him. Dan says, “Denny is one of the greatest safety mentors ever. Under his leadership, I was honored to receive the Jack Beno scholarship.”

In 1998, Dan’s dream job was realized when he was promoted to the Director of Safety for McAninch. Dan developed a proprietary safety program, grew his team to five safety professionals, and working with his team fostered a workplace environment that embraced a positive culture of safety. Then Dave Miller, Waldinger’s Senior Vice President of Operations, heard about Dan’s work. Dave tried to get Dan onboard at Waldinger for about a year before Dan made the leap, as Waldinger’s growth trajectory offered him more opportunity to continue his path of advocacy for skilled craft workers.

Dan’s role has been expanded from Director of Safety to Director of Safety and Employee Development. He says, “By Waldinger leadership giving me a larger role, safety has become even more interwoven into our company culture.” Dan’s key to safety success focuses on building strong relationships with field personnel. Dan believes in marrying safety with production; he says they should not exist in two silos. Safety and production are integrated and inseparable.

Stay up to date by following our social media accounts: